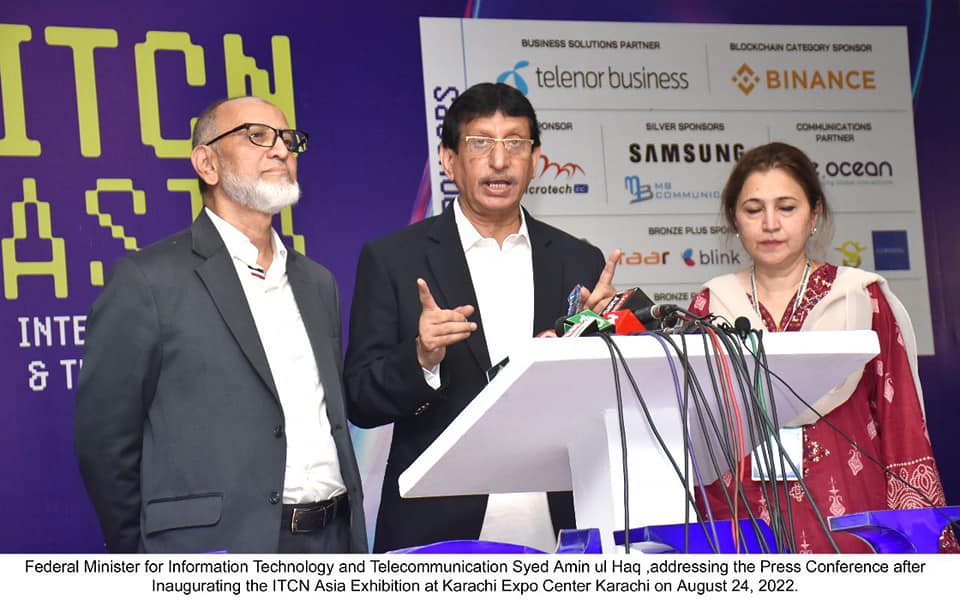 Additional Secretary MoITT Aisha Moriani, representatives of IT and Telecom companies, officials of MoITT and relevant organizations were also present at the occasion.

Around 500 companies had set stalls in the exhibition to showcase solutions for various important fields of IT and Telecom sector including Cloud, Data Center, Cyber security, ERP, Education, Banking and Finance, Health and Pharmaceutical, Ecommerce, Artificial Intelligence, and Robotics with a focus on networking, knowledge sharing and lead generation.

Federal IT Minister, later, addressing the 3rd Digital Pakistan Summit reiterated government’s commitment to swift growth of IT and Telecom in the country and said that Prime Minister Shehbaz Shareef was taking keen interest in development of the sector for sustainable growth of national economy.

He said that government under Digital Pakistan vision was focusing on skill development to meet with demand of the industry besides providing optimum facilitation to private sector and ensuring enabling policy initiatives and legislation.

He said that 6 National Incubation Centers were working across the country while the 7th center was all set to be opened at Hyderabad soon that will be followed by opening of another incubation centre in Faisalabad.

Cloud Policy and cyber security policy has already gotten approval of the federal cabinet to deal with issues while personal data security bill was in advance stage and soon it would be tabled in the cabinet for approval, the minister informed and vowed that national security and business friendliness would be safeguarded in the bill.

Digital connectivity is being expanded to more rural areas of the country to ensure universal access to all, he said adding that teledensity has been extended to 195 million while broadband facility was available to 120 million population of the country.

He informed that fast tracking of digital connectivity was evident from the fact that 37 projects were completed under Universal Services Fund (USF) from 2007 to 2020 with an estimated cost of Rs.31 billion while MoITT started 28 new USF projects worth Rs.29 billion in year 2021-22 alone to connect the underserved areas with digital world to help businesses flourish across the country.

Amin-Ul-Haque said that export of IT and telecommunication sector reached at $ 2.61 billion in fiscal year 2021-22 and ministry was determined to achieve the target of $5 billion set for current fiscal year.

Highlighting other initiatives in the regard the IT minister informed that following paperless meetings of federal cabinet a paperless meeting of Sindh cabinet was also successfully held a few days back.

“We are going to digitize parliament as well by carrying out all the parliamentary proceeding in a paperless environment,” he added.

He appreciated efforts of organizers of ITCN Asia 2022 and said that for the first time in history of Pakistan services of IT sector were recognized on state level as they were endowed with prestigious pride of performance awards.

Aditional Secretary MoITT Aisha Moriani, addressing the summit highlighted initiatives and major achievements of the ministry and said that E-commerce transaction volume was increasing in Pakistan.

She said that volume of remittances by IT sector professionals, number of freelancers, equity investment and internet penetration as significantly increased in the country as well while digital payment system (RAAST) introduced by State Bank of Pakistan facilitating the general public as well as the IT sector.

Member IT MoITT, Syed Junaid Imam while stressing need of digitizing data for reapng advantage of emerging technologies in Pakistan said that data governance policy was in making that would ensure inter connectivity and data sharing among all government departments and organizations while assuring data safety, cyber security and maintaining privacy of citizens.

Earlier, the federal minister visited stalls of different companies and start ups set up in the ITCN Asia and inquired about services and products being offered by the concerned entities.